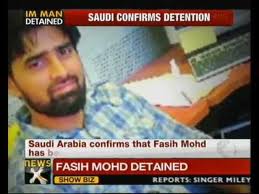 
New Delhi, June 30 (CMC) In a second big terror catch in less than a week’s time, Saudi authorities on Saturday confirmed to the CBI, the nodal agency for the Interpol in India, that they have nabbed Fasih Mehmood, an alleged terror suspect in Bangalore blast and Jama Masjid case.


An engineer by profession, 28-year old Fasih is alleged to have been involved in the Chinnaswamy Stadium blast and the shooting incident near Jama Masjid (Delhi) in 2010 and was wanted by both Delhi and Karnataka police.


Saudi Arabia also confirmed Indian authorities about the detention of Fasih Mohammed who may be deported soon.

On the request of Karnataka and Delhi police, CBI had asked the Interpol to issue a Red Corner Notice against Fasih after which Saudi authorities conveyed to them that he had been apprehended by them.


Meanwhile, Indian authorities are in touch with Saudi authorities on the formalities to bring him back.


The CBI is likely to send a team to Saudi Arabia to discuss the extradition of Fasih Mohammed soon, as per news reports.